My first official Youtube vlog challenge was such fun! I chose to join the trending online challenge called – 4 photographers shoot 1 model – and then I decided to add an extra challenge – we only had 3 minutes to get the shot!

I contacted Mishqa, Nina & Jess to see if they were up for the challenge. When they all said yes! I began planning the model, location and makeup details.

Our model was Pumz (@melanin.pumzz) , we had Amy (@amyloiuse_makeup_) on makeup as well as Chi Chi (@nailsbychichi) on nails. Chi Chi was up until 1am before the shoot day creating the perfect nails for the shoot.

I chose Wijnland Auto Museum as our location. I liked the venue because they love having photographers visit, I love cars, there are tonnes of options for locations and, being an all girl team, it is safe!

We all arrived at 9am and us photographers took a walk around to view the locations and claim one for each of us. Nina (@nina_zimolong) chose the first location which was a workshop. She shot first and then the rest of us each had a turn to shoot in her chosen area – only 3 minutes per person!

I just loved the dark, moody background. I decided to shoot with Pumz facing the open doorway to get a beautiful natural light on her face and therefore make the background even darker… How amazing were Chi Chi’s tyre tread nails?

These were my shots: Location 2 was selected by Mishqa (@rhodagraph). Mishqa shot first, and again, the rest of us followed. I liked the dilapidated feel of location 2 but battled to choose between shooting in the shade vs full sun. I decided to capture both options as much as I could so that I could choose my favourite later on… changing the extreme settings between the sun & shade was a challenge when you’re pushed for time…

Here are my photos: Location 3 was Jess’s (@jessthecreative) selection. Jess’s photographic style is colourful, hence her choice being a row of different colour VW Beetle’s. She chose the orange one specifically. It worked so well with Pumz’s outfit !

I liked this location a lot because we all shot very similarly (with so few options of angles etc) and it was very interesting to see how different our styles & “photographic eyes” were in the final edits.

I chose to shoot inside the car, through the window and then get some movement shots in front of it.

Here are my photos: The last location was my choice. Wijnland Auto Museum has an aeroplane – it’s been photographed SO many times but how could we not shoot it?! I was most excited for this location but soon realised it would be the biggest challenge. If I wanted to shoot both inside and outside of the plane I would have 1.5 minutes to shoot in each section and I’d have to factor in running down the stairs – assisting a model who was scared of heights… (LOL.) I decided to start inside with my 50mm (which was a bad idea). Although my 50mm shoots well in low light, I didn’t factor in the small space I had so I battled to capture the inside of the plane AND the model.  I then quickly ran down the stairs and changed my lens (in 10 seconds) so that I could use my 24 – 105mm to capture the model and the entire plane. With only 30 seconds left I got my best shot of Pumz sitting on the stairs of the plane… phew!

Here are my images: I’d like to say a HUGE thank you to everyone who joined this fun shoot: 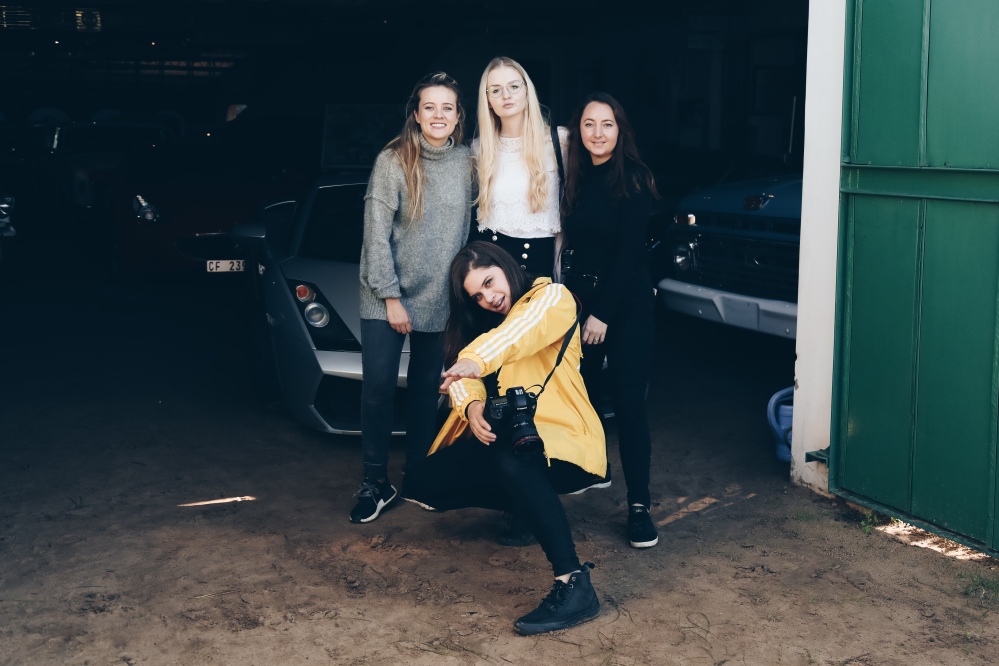 Time keeper: Mishqa (the other one LOL)

Wanna see the outcome of the challenge, who photographed what? Someone get’s shocked on their booty (drama!) …. check out the below video: